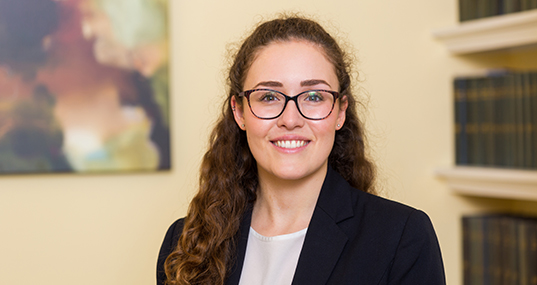 Melissa joined 30 Park Place in 2018 following the successful completion of her pupillage under the supervision of Christian J Howells (Civil and Public) and Catherine Heyworth (Family). Since then, Melissa has developed a busy Civil, Family and Public law practice.

Accepting instruction in all civil litigation, Melissa acts for both Claimants and Defendants in personal injury, RTAs, commercial disputes, OLA, and employment claims. She is regularly instructed in trials, including small claims and fast track matters, applications and CCMCs. Additionally, Melissa is developing a practice in regulatory work, and has achieved excellent results when representing nurses at NMC disciplinary tribunals. In all areas, Melissa is happy to advise throughout the litigation process on liability, quantum, prospects and procedure.

In respect of Melissa’s inquest practice, she frequently appears on behalf of families and professional parties. Most recently, Melissa was instructed in a series of six inquests relating to the deaths of residents at a nursing home, on behalf of a nurse who worked at the nursing home. Live issues included care home neglect, the issue of unlawful killing, the protection of vulnerable adults and the effectiveness of inter-agency working. Melissa successfully resisted a finding of unlawful killing against her client, through both written and oral submissions.

Undertaking both public and private children law cases, Melissa’s practice encompasses the full spectrum of family proceedings. She represents Local Authorities, parents and the children in a wide variety of public family law proceedings where allegations include neglect, emotional harm and physical harm. Within the realms of private family law, Melissa has experience in DRAs, finding of fact hearings and final hearings, and is experienced in cases where issues range from contact disputes to allegations of neglect, emotional harm, physical harm and sexual harm.

Melissa is developing a busy Court of Protection practice and is regularly instructed on behalf of Local Authorities, Health Boards and RPRs in applications under the Mental Capacity Act 2005 where issues relate both to capacity disputes and decisions regarding residence, care, medical treatment and contact.

Melissa is well-experienced in providing detailed, clear and sensible advice on all aspects of the litigation process across all practice areas in which she operates, as well as having a real proficiency for courtroom advocacy. Melissa is an approachable, personable advocate who has an empathetic but pragmatic approach with both lay and professional clients. Since becoming a tenant, Melissa has developed a busy paper practice across all areas of law, and welcomes this in addition to court work.

Having grown up in Cardiff, Melissa was educated at Cardiff High School before reading Law at the University of Bristol. She remained in Bristol to complete the Bar Professional Training Course before returning to Cardiff for pupillage. In her spare time, Melissa enjoys swimming, cycling and travelling.